So, It’s gone two weeks since the race, but I haven’t found the time to contemplate and write this race report. Anyway, here goes!

A funny thing with racing in triathlon is that you get up so early in the morning since the gun usually goes off at 07:30. That means I’m eating my breakfast at 03:30 in order to have 4 full hrs to digest it before going into the water. This particular night/morning I was sleeping next to my oldest daughter Julia who woke up when I was going to eat, hence I had the pleasure of actually having company while eating my race day breakfast… A very confused daughter who was encouraging me to eat fast so we could go to bed again.

At 05:15 I left the house enroute to ”La rotonde”, the big fountain from where the shuttles would take us to the start. Now at 05:30 in Aix-en-Provènce on a sunday morning the clubs have just closed and the not so sober crowd is rolling home or elsewhere… I don’t think I’ve ever gotten so many cheers from just walking with my race pack along the street :). You know what they say, babies and drunken people are the only ones telling the truth…

Anyway, the shuttle took us to ”Lac Peyrolles” which is situated 20 km north of town and where the swim would be held. This day, however, there was going to be no swim… 15°C in the water (normal Swedish summer temperature), 10 m/s wind (gusts going up to approx 17 m/s) and 9 °C in the air forced the race organization to cancel the swim. Now, since T1 and T2 were at different locations they couldn’t replace the swim with a run, instead it became a rolling TT start in BIB nr order… I had 1127… out of 2500!!!

So after the PROs had started, they started to send off AG athletes 5 at a time every 8th second… This meant a couple of things. First of all, my start was post poned by an hour setting my pre race routine off balance, but that was ok. What I hadn’t taken into consideration was that I wouldn’t have any adrenaline in my body when starting the bike so I was freezing cold!

In order to counter act my cold I set off at a bit higher pace than planned… For the first 15 km I was doing 41,3 km/h on average with a power output of 281 W Np (3,23 W/kg), the wind was in my back and I was sailing… For the whole bike split I passed approx 1000 people in total. The first hill came after about 17 km/h and this really helped me to slow down a bit and find a good ”comfort zone”, remember that my goal was to perform a good race in general but also a good run split in particular.

All real climbing was done on my lowest gearing combination which on this day was 39/26 and approx 310 W (I had an FTP of 306 W). Naturally I had a few frenchies pass me climbing but believe me I flew passed them on the flats and downhill.

The funny thing with this bike course is that it has everything; speedy flats, long not so steep climbs, steep climbs and rather technical downhill… Now this last characteristic really shows at about 52 km into the race where there’s a 3 km downhill section with 21 hairpin turns and a total elevation loss of 150 m. This part was quite scary since it was such a mixed field with all different levels of cyclists…

After 60 km the course shifts direction west for Aix-en-Provènce and since we had tail wind for the first 20 km, side wind for the following 40 km, we were now heading into the wind… When going through Pourrières (where I cycled from the thursday before the race) I passed my team mate Camilla Landén who on race day had a disc wheel mounted on her bike… Now I’m weighting in at 87 kg and I was having a bit of a trouble with my 90 mm rims… After I had passed her the wind speeds kept picking up and all I could think about was, If this is throwing me 3 m side ways from time to time, what is it doing to Camilla who’s half my weight and using a disc wheel. Unfortunately my concerns were confirmed after the race. Camilla had been thrown off the road just before the final climb up to Col-du-Cengle started and ended up in the hospital. Luckily she had an angle watching over her and she didn’t sustain any critical injury.

If I didn’t know what the climb up to Col-du-Cengle was all about I would have been scared when starting it, but since I had ridden the final 30 km of the race 4 days prior I was confident. I was passed by many at the start which I passed half way up because I knew how long the climb was and how to use my power properly… To people living anywhere else than Sweden this climb isn’t anything special, but to me the 4 km and 250 m of climbing is enough to keep my heart rate steady around my LTHR for 13 minutes…

I had promised myself to increase cadence a bit and make sure that I used the time to refill energy and fluids when decending into T2, which I succesfully did. I definitely could have finished the remaining 17 km faster than I did, but in retrospect I think my ”patience” helped me on the run split.

Coming into T2 the volounteers was catching the bike and encouraging you to run fast to the run bike ”allé, allé, allé”… I really felt like a PRO. Looking at the number of bikes in T2 I wasn’t that far behind either since I had started 40 minutes behind the PROs… I new I had an acceptable bike split and I now felt confident going out on the run. 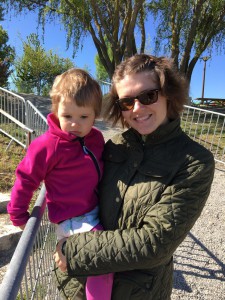 Aida and Julia, 2 of 5 in my super supporter crew!

Since I already was refueled, I could now focus on finding and keeping pace on the run. Something that was helped tremendously by my family. The run course is very well placed in the centre of Aix which made it possible for them to cheer me on at 4 locations on each lap. As always I was going a bit fast at start, but the elevation profile of the run course made me find a suitable pace… Every lap included approx 140 m elevation gain. I let my pace slide up and down between 3:45 – 4:30/km depending on if it was a segment with up- or downhill. Not only is the run course fun because of the variation in elevation, but it is also packed with people every step of the way. In terms of speed I did the first lap in 4:08/km, the second one in 4:17/km and the final one in 4:24/km, with the last kilometer at 3:40/km. Not even close to negative splits, but the first real solid run split performance I’ve done. 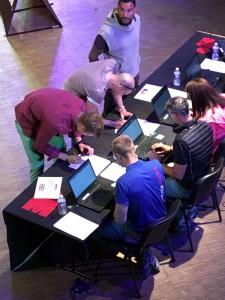 Claiming my slot to the IRONMAN 70.3 WC in Mooloolaba

My plan was to qualify for the IRONMAN 70.3 WC in Mooloolaba in September, but 21st place would the roll downs really go that far!? The wait during the slot allocation was excrusiating. AG 30-34 got another slot from another AG and then the name calling started… No one of the first 10 claimed their slot (6 already had qualified since this was the second to last race with slots for the WC this year) and now the sweat started to pearl in my forehead. Two slots where claimed between position 11-20, which meant I got it and my wife cheered ”We’re going to Australia baby!”. It felt unreal. A goal that I set up in December had now been reached and in September we’re going to Mooloolaba, Australia. Since my wife and I are both turning 30 this year we will be celebrating it with a three week trip there instead of having a big party, which makes our friends sad :).

So, now the preparations start… 16 weeks until race! #roadtosunnycoast 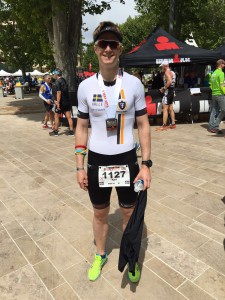 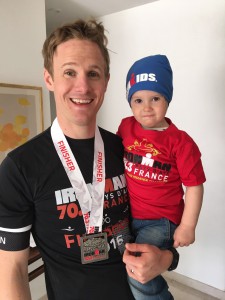 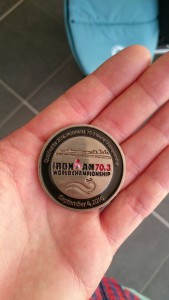