When I was going to Australia one of my team mates sent me a text saying, ”Can you please pick up a jar of Vegemite for me on your way home?”. Now I had never tasted vegemite before, so I did during one of our breakfasts. Quite frankly it’s the most disgusting thing I have ever tasted in my entire life. As a response my friend said, ”It’s an aquired taste”. Needless to say it doesn’t tickle any part of my palette in a good way.

A habit that I did pick up in Oz was the banana bread. Now I know that this might not be originating from down under, but it’s the first place where I’ve been where you can get it almost anywhere. Toasted with butter, with ricotta, with fruit or just as is, no matter how you devour it it’s gorgeous. Since I was there in and around a competition I wasn’t to picky about what I ate, hence I ate a lot of banana bread, which evidently usually contains a lot of refind sugar.

Coming home, I have been craving that banana bread but since I try to stay away from refind carbohydrates in general it’s been sort of a no no, until now! After combining lots of recipes on the web, picking the bits and pieces from here and there I finally landed an awesome recipe yesterday which I would like to share here below. 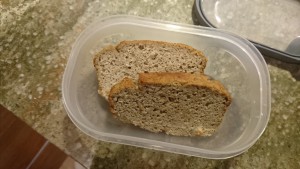 Throw a pair of slices in an air tight container and bring to work!

One loaf of amazing banana bread

There are as many ways of enjoing this bread as there are people in the world, but my favorite is throwing a slice in the toaster giving it a crisp outside and then adding butter to it. Brilliant, super tasty and nutricious to eat for breakfast, mid-morning or afternoon snack. Enjoy!