Radio silence from my end usually means one out of two things; either I’m swamped with work or I’m a bit blue. This time it’s been a bit of both.

It’s been roughly 2 months since IRONMAN 70.3 Pays D’Aix. At first I was filled with energy when I got home, I rested for a bit and then started reloading for my half marathon race in Gothenburgh that took place two weeks after the 70.3. This was going to be the first HM where I actually perform according to my form… didn’t happen and it bummed me out totally. Even though I set a new personal best with 4,5 minutes (1:30:13) I really felt like a big failure. After getting some encouraging words from team mates and coaches I bounced back. 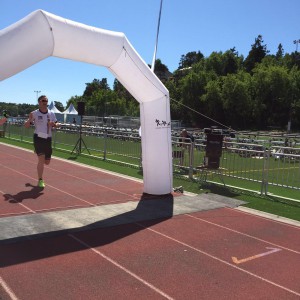 Next up was a sprint race in Stockholm the first weekend of june. I had never done a sprint and was eager and a bit affraid to try going full speed in all disciplines for an hour. Unfortunately I got grass pollen allergy for the first time in my life the week before and I wan’t even sure I was coming to the starting line. Race day came and I felt relatively fine. I had good speed on the bike and run the couple of days before although I felt the difficulties with breathing due to the allergy. What I hadn’t tried was swimming. Swimming with allergy is like having a straw duck taped to your mouth… every time you tilt your head to breath you get like 30 % of your capacity. So I kept up with the front pack for 150 m, then my muscles were flooded with lactic acid due to the lack of oxygen and I needed to slow down a lot. Given the situation my swim split of 13:33 wasn’t that bad. The bike was controlled and ok, but the real upside was my run split of 18:00 for 5 km! 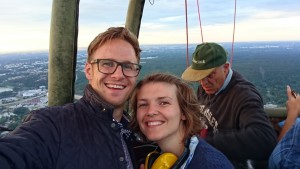 Birthday present for both me and Aida from my parents. Balloon trip over Stockholm… Amazing experience!!!

Now we’re 5 days from the Swedish nationals on the half ironman distance in Vansbro and it’s just been a midsummer weekend, that also happened to coincide with my 30th birthday. Since I qualified for Mooloolaba we decided to spend the celebration money for both my and Aidas 30th birthday on a three week trip there instead of a big party. This is also the reason for why I don’t have any hopes of performing this weekend. To me the race is a good check regarding my bike form and also where I need to put extra focus for the remaining 10 weeks leading up to the IRONMAN 70.3 WC. 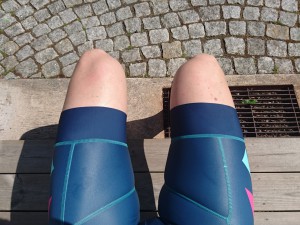 Low these bike legs at the moment

So far this year by bike legs haven’t been very good… I think that it has been a trade off for my running form. I’ve come to the conclusion that in order to achieve a higher running performance one has to sacrifice some of the cycling performance and vice versa. Having that said my running isn’t poor at the moment it’s just not where it was two months ago. My cycling form however… This saturday I did 2x(3×3 min @375W with 3 min rolling rest) followed by over-n-under repeats 2x(2+1 min @295/345W) in 30 °C heat.

What’s most important right now is that I’ve got my eyes on the price and that I’m back on track. Last week I did 12,5 km of swimming and a total of 11 hrs of training, all with good focus and quality. If I can keep this up for the next 10 weeks, I will be going out of the racing season with a bang! 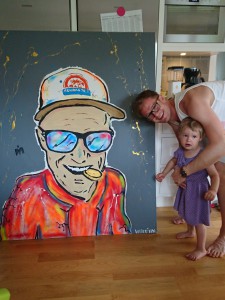 I got a painting from Aida as a birthday present. Fittngly it’s a portrait of me from the slot allocation for IRONMAN 70.3 WC painted by my friend Klas Wirehn