First off I want to say that without my support team here with me, none of this would be possible. Lead by my amazing wife Aida, the support team consists of our daughters Julia and Liv and of course my two number one supporters mother Birgitta and father Claes.

Now this post will only be covering my preparations here on sight in Mooloolaba, Queensland, Australia together with a few words about the last weeks and us coming here. Later on I will give a more full chain of events.

This has been my one goal of this year. Having that said, I’m quite fed up right now. I just want to lay down and eat a full box of Ben & Jerrys (I will tomorrow afternoon). I’m not only feeling this, but my body is actually showing it by accepting a cold two weeks ago that lasted for one week… When we arrived here in Mooloolaba on sunday night it had just sort of cleared. However, since I have been very consistent with my training for the past year that week of no training only seemed to do me well.

In short here’s what my final taper week has looked like. First thing monday I started off with an ocean swim just to get a feel for the water. I was going to do a smooth distance session of 2000 m and it felt like I was going slow… turns out I wasn’t. I was doing 1:29/100 m… Hmm 20 °C, salt water and wet suit… super powers! My swim the day after when I was doing some speed intervals averaged at 1:16/100 m over 1800 m… Needless to say I have high expectations on my swim tomorrow. If all goes well, maybe I’ll do a 28?

On tuesday I also did my first bike session which was super threshold repeats at 105%, 108%, 115% and 121% of FTP, felt great. Wednesday was just a tempo run, which actually felt really bad. Recently my run form has been shifting alot, but I hope that this last taper week has made it on point. I felt better on the run I did on thursday again and even better on todays recovery run for tomorrow. If I pace myself correctly on the bike, I have hopes of doing 1:29-ish… 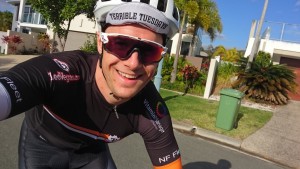 Thursday I went out on a 90 min bike ride with Tim Ford (MaccaX racing team) that I met last December in Thanyapura for the first time. We were supposed to go out and try the hinterlands loop which is a ”hilly section” of the bike course. Now, since Tim has done this race three times before, he thought that he’d find his way out there… We ended up doing two consecutive 12 % climbs of 150 m before we realized we were a bit off. When we came into the hinterlands loop, having already done those other hills, that felt like nothing. It’s only really one hill that’s about 16 % at the steepest part, but the total height of the climb is 25 m and it’s like 150 m long…

I’m realizing it’s going to be a really fast bike course and feeling my crisp legs on todays last taper intervals I could go really fast tomorrow. However I do want to finish with a solid run so I’m gonna say 2:19… 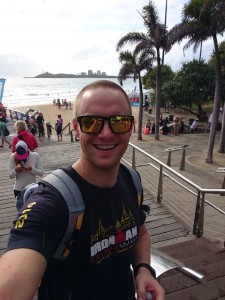 A full Mooloolaba beach at 06:00 in the morning

Friday was a recovery day with only a swim on the race course in the morning (at the right starting time 06:45) and I’ve already covered todays (saturday) two last sessions here above. 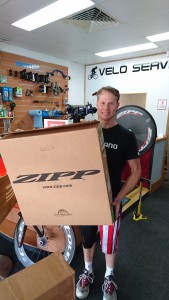 I’ve had a really good week here where I’ve been able to do all my sessions as planned. I’ve gotten my gear in order with a new disc wheel (Qatar Airways smashed mine on the way here), an 11-28T cassette (so I can spin up that 16 % hill), a new chain and new shiny white bar tape. What could go wrong!?

To finish this off, I’ll take you through the race, leg by leg with my expected performance in terms of time: 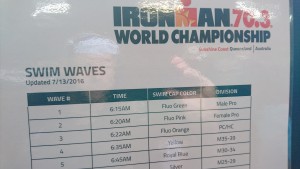 The start is 100 m out from the beach in the water. I will be starting in the 3rd wave at 06:45, the PRO:s at 06:35 and M35-39 at 06:40. The past week has been really windy/wavy in the mornings and since that doesn’t seem to impair my swim performance I kind of hope It’ll be windy tomorrow aswell. The course is along the shore out about 750 m, then a left turn 100 m, another left turn and than all the way back past the start. I’m going to try to get away quick in the start to try and get a hold of the fastest swimmers in my AG (M30-34), I don’t want to get stuck behind slow swimmers in the start. 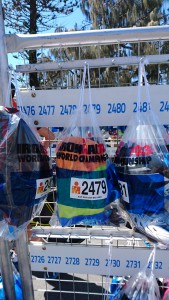 Coming out of the water, we’re running up the beach about 150 m before we get to our bike bag. I only have my helmet, a towel and some gel in there. Shoes are clipped on my bike and we only need the bib on the run. From where the bike bag is hanging it’s about 150 m to my bike and from there it’s about 200 m to the mount line… In other words, it’s a long T1. 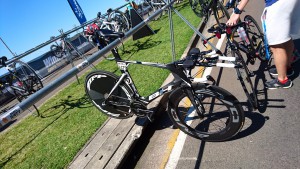 The first part of the bike course is back and forth on the Sunshine Motorway for about 40 km before you enter the hinterlands. This part is really flat and I’m expecting to be rolling at 40+ km/h depending on the winds. It could well be 45 km/h in one directions and 35 km/h in the other… Going into the hinterlands will be nice because it will give us some variation to what we have been doing up until then. This is also where some inexperienced riders could smash their legs, resulting in a poor run. It’s mostly rolling hills, but on the first lap there’s the 16 % hill where I now will be sitting down spinning in my 39-28 set-up, while I think some will be standing up in their 23T… On the other lap there’s a slow like 7 % gradient where one needs to pace himself to not gain lactic acid. From there on in to T2 it’s flat again… 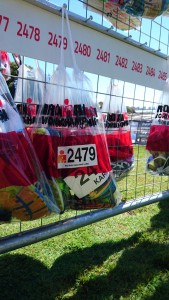 Coming in from the same side as we did in T1, which is good because my bike position will be one of the first. After racking up the bike we’ll be running up to the run bags approximately 200 m (where the mount line was) and then out on the run.

The run is on a two lap course, back and forth to Maroochydore north of Mooloolaba. It consists of one hill and it’s going along the shore so depending on the wind it can be tough and I need to keep my head straight running smart behind people in case of headwind in one direction. I should be able to do a smart consistent run and my hope is to be able to really push my limits all the way to the finish line the remaining 5 km from the last turning point. 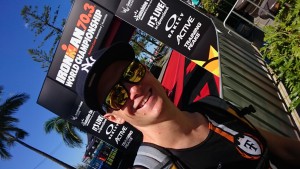 Hopefully it says K.Ericsson 4:22:30 on that display tomorrow

So if everything goes according to plan (which it never does) I’ll end up completely wasted behind the finish line after 4:22:30. Let’s reconvene tomorrow and see how I did :). No matter what there will be beer and ice cream at the finish line!

For those wanting to follow, I start local time 06:45 and we’re UTC+10, which means that the start is at 22:45 in Sweden today… My BIB-nr is 2479 and can be found using various tracking apps in android and iOS or on http://ap.ironman.com/triathlon/coverage/athlete-tracker.aspx?race=worldchampionship70.3&y=2016